My mom moved in with us 11 days ago after dad passed away. My parents immigrated from Korea in the 60s. You can take mom out of  Korea, but you can’t take Korea out of mom. She has no filter and even though she always has the best intentions and is the most loving person you could ever meet, her comments can sound strange, random and even hurtful. But she’s just doing her, you know?

This morning, I was driving her to church when she shared this gem:

“You know, when I look at my children, I realize I am very old. Because they look so old.”

Here are some great stories about mothers (New Yorker).

To my mother, who, (like so many other moms), is one of the most understated human beings around.

My mother embraced a new country as a young adult. She worked hard to learn the language and the customs. For her, coming from South Korea to America was probably even harder than our move from San Francisco to Arizona. Probably.

She couldn’t drive, so she walked. A lot. She was alone must of the time, because my father was working and going to school simultaneously. My sister was born 11 months after me, so you can imagine how challenging her life was at this time. 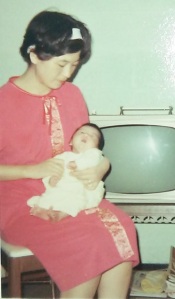 She learned to love pan pizza and Michael Jackson. She listened with open ears and heart to our “rock music.” Boy George fascinated her (“Really, he’s man? Not woman?”) She had – and still has – an eye for style and fashion. She can sew better than any professional I know.

Yooni emulated naughty boys we saw in the malls and amusement parks. They threw up their middle fingers and  muttered expletives. At times, she wanted to express her frustration and anger so she would raise her fist (with no finger projection) and yell, “Fist up!”

My mother eventually learned how to drive and she drove us to cello, piano, violin lessons and concerts. She drove us to our Tae Kwon Do lessons. She cooked amazing meals and did all the cleaning. She wanted to hold a “real” job, but it never happened.

But she has held several volunteer jobs. The most recent one was as an assistant at an Alzheimer’s home. She pushed wheelchairs, changed bedding and spoke with residents. These residents rarely remembered anything day-to-day, but because my mother treated them with kindness and respect, many would light up when they saw her. They would hold her hand and call her friend. My favorite story is about one man with severe Alzheimer’s who never had visitors. Not a single friend or relative ever came to see him. He didn’t have many clothes and his undershirts were starting to yellow. My mother went to Macy’s and bought him several undershirts. Her co-worker told me this story. My mother never brags. It’s a special person who would do this for a “stranger.” But to do this for a stranger who won’t remember her or her kindness? My mother is an exceptional human being and I am so grateful for her. 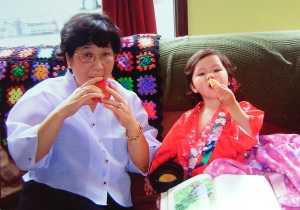 I’m also grateful for these goofballs: 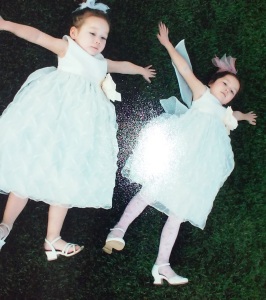 When Josie was two years old, she slept in a white iron crib.

When I heard her stir, I’d come into the room and sing, “Good morning, my beautiful child!” I’d make up my own lyrics and melody, and she stood there, hands on the rails, lips pouting, curly hair flip flopped about her head. Then she’d lisp, “No thinging! No thinging!” I’d stop singing and carry her out of the crib. She had the Terrible Twos something bad. She threw temper tantrums daily and her jealousy of her newborn sister was immense. Finally, after a week of this, I decided I couldn’t be bossed around by my own toddler. I sang my song and she demanded I stop. This time, I answered, “Josie, it’s morning. I love you and I’m the mommy and you’re the baby and I’m going to sing if I want to and you’re not going to tell me no.” So I resumed singing. She stared at me incredulously. “NO! NO THINGING! NO THINGING!” She started to jump up and down, hands still on the rails. As she came down, her chin hit the rail and she bit her tongue. She cried her little lungs out. “Uh, I will come back later.”  I told her. I felt the Mom Guilt all the time. Poor Josie was left to her own devices while I changed Ava’s diaper,

fed Ava, took naps. I’d have to hand Josie off to her father a lot.

To this day, we rarely spend one on one time together. But today, I offered to go shoe shopping with the girls and Ava wanted to stay home while Josie wanted to go with me. So off we went. She found a red pair of Keds with wide ribbons. We joked around a lot. We laughed and ate chocolate.  We bought a gift for friends who are expecting a baby, a baby carrier that can be worn in the front or as a backpack. I held my babies that same way frequently, enjoying their little bodies laying against mine, while I dusted furniture.

Josie wanted to hold my hand as we walked through the mall, this twelve year old who is now a half inch taller than me. I reveled in it, for I wondered, “At what age will she find it embarrassing to hold my hand?” She wanted nothing more than to just be with me. I’m a lucky mom.

Some occasions in life seem designed to test you. I believe they are there to see if you do the right thing, w 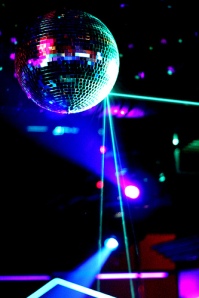 hich is simply to say nothing. If an idiot offends you with an impulsive, derogatory remark, you are the better person for ignoring it. I’ve been taught that and I impart this bit of wisdom to my daughters and students. Growing up in Iowa in the late sixties, early seventies, I was called “chink” quite a bit. I learned to turn my head and ignore it. At a roller skating party, a boy of about fifteen, skated up to me and sang loudly with the music, “Like a refugee!” I was eleven and had no idea what he was talking about, but from the laughter and looks his friends gave me, I knew it wasn’t a compliment. There was also that song, “Everybody was Kung Fu Fighting” which the boys really wanted me to know, but I digress.  I tell my daughters to do the same thing when “boys” or “people” bother them. I don’t recall arguing with my parents the way my kids do, but whatever….that’s not what I’m writing about, either.

My lovely mother is here to help me out. Because I am not allowed to drive for three to four weeks post-surgery and Willey has to work, my mother is THE driver. I will not alarm you, dear reader, by sharing her driving record with you. Let us just say she’s greatly improved in the last two decades. Let’s just say at about the same time boys were serenading me with the Kung-Fu Fighting and Refugee songs, my mother would feign any knowledge of English when she’d be pulled over by an officer for things like speeding or going through stop lights. She suddenly lost “all her English” and was usually let go with a warning.  I distinctly remember her saying “In Korea, no lights! I confused,” and the officer let her go!

When she arrived here at my house last month, I painfully detailed the importance of yielding at the roundabouts. We have two in a row we must drive through to get anywhere (Safeway, Peter Piper Pizza, the hair salon, etc.). “Caroline! You think I can’t drive? How long I’ve been driving now? I drive in Chicago! Mesa is so easy, no traffic.” I imagine the countless number of drivers who must honk at her (and give her other gestures) as she makes her away around, and I think her loss of hearing is a blessing in this case.

Like many of her 66 year old comrades, her hearing is all but gone. My sister purchased top-of-the-line hearing aids for her. Even with these, her hearing capacity can be 60%, depending on the condition of her batteries.  She copes with her inability to hear with the catch phrase she’s learned from co-workers in an Alzheimer’s home where she works as an aide. She says, “Gotcha” and nods her head “yes” at the same time.  Most people just say, “Yeah” and smile. My mom says, “Gotcha.” If you know my mother, this woman who immigrated from South Korea 43 years ago and speaks with a thick Korean accent, you would appreciate the utter charm of it. “Gotcha” and a nod of her permed head.

Yesterday, after dropping my daughters off to summer school, we headed to Phoenix to meet my oncologist.

“Mom, you’re going to go straight, just as if we’re seeing Dr. Parson, but Dr. Isaacs is in Phoenix, which is five exits past Dr. Parson’s office.”

With both hands gripped tightly around the wheel, she gives me a shake of the head and a  “Gotcha.”

“OK, mom, make a left at Shea and go straight for awhile. I’ll tell you when to turn right.”

“You forgot to shave? That’s OK. Why you have to shave?”

“Oh.My.Gosh. You forgot your hearing aids?!” I ask in disbelief. Suddenly, I realize I could probably drive. I feel fine and have gotten a lot stronger since my surgery two weeks ago. My chest is throbbing, I’m anxious about what the oncologist will say and now I have to address this.  I choose to remain silent.

Another shake of the head, her eyes squint into the light (no sunglasses either). “Sometimes, hearing aid is bother. Really bother you. I don’t like them.”

We head into the office and meet a wonderful doctor. Long story short, he reads my six page pathology report and tells me that with the double mastectomy and the very small sizes of my cancers, he recommends no further treatment. No chemo! No radiation! Not even Tamoxifen! I am elated, ready for some Kung-fu fighting.

My mom is here visiting. This trip was planned pre-diagnosis, so it’s all about fun, fun, fun! Took her to Cosmos Friday for a much needed color, cut and style. Going to Scottsdale Fashion Square today. We’re just hanging out, watching Korean television shows (thanks Grace, for the DVDs!) and eating home cooked Korean food.

Mom’s sight and hearing are going. She is due for new glasses, “Everything is fuzzy” she complains. Even when she DOES use her hearing aids, she can’t seem to hear that well. “Maybe I need to turn volume up,” she declares. YES, do that! We were in the kitchen and I said, “My gecko is getting fat.” She answered, “You are not fat. You are beautiful.” “Mom, I said my gecko is getting fat.” “Just perfect, you. You are perfect.”