He asks for more –

Outside, the owls – a traveling pair – coo

I wonder if she has to spell for him, too

blooming in their own time

we buzz and buzz in our colonies

some of us make honey

With your smart phone, you can:

What will you do with it today?

Weeks ago, I came home from work to find my daughters completely immersed in “screen time.”

Josie, (aka Instagram Queen), was on my iPad scrolling and commenting on various pictures. Scroll, comment, scroll, comment. Ava was on her laptop watching YouTube videos of past and present winners of The Voice. They hardly looked up as I put my things away, changed my clothes and started dinner. I asked them how their day was, what happened in school…and they responded with grunts and monosyllabic answers: “Good, fine….” I noticed that I had to nudge and then nag them to practice violin, something they used to do more willingly.

So I made a decision. With husband’s agreement (it won’t work if only one parent is enforcing it), I decided to confiscate and hide all electronics until violin practice and homework had been completed. Do you know how hard it is to hide an 84″ flat screen TV?  It worked. Ava completed her homework and violin practice and then played catch with Opal in the street. Josie completed all of her work and then picked up dog poo from the backyard! They conversed with me and I learned that Ava is very fond of her new friends Lucy and Caroline at school and Josie is frustrated that her math went from an A to a B.

Ahhhhhh! I had my family back! It felt mean and terrible to do, but I’m their mother, not their friend. I cannot allow them to become Screen Time Zombies in lieu of communicative students and daughters. I encourage you to try this, at the very least, put pass codes on your devices (I did!)  and don’t allow them screen time until the work is done.

1. a blustering, quarrelsome, overbearing person who habitually badgers and intimidates

2. Archaic. a man hired to do violence.

I have a problem with this definition. I don’t think you have to pick on someone “smaller” or “weaker” than you in order to be a bully. Bullies pick on nice people. Nice people are not weak. I would edit the definition to read:
1.  a blustering, quarrelsome, overbearing person who habitually badgers and intimidates others due to self-hatred.
The CAUSE of the person’s behavior helps us to understand the reasons behind 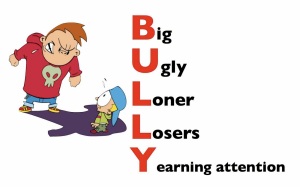 the action(s). We (society) are more apt to think of ways to prevent bullying or solve the problem if we understand the cause and include it in the definition.
I ask my 32 students (often): “Imagine you wake up to a sunny day and you’re in a great mood. You’re looking forward to your day because you’re going to the carnival or a beach vacation or something great. You’re happy. Do you feel like picking on someone? Do you feel like cutting them down and making them feel badly?” The answer is always no. Then I ask, “What if you wake up on the wrong side of the bed?  You’re in a bad mood, you feel slightly sick about a test you failed….nothing seems to be going right. How likely is it that you will take it out on your brother? A kid at school you don’t like?”  They always get silent and agree that if they’re not happy, they don’t want to make others happy.
***
THIS is the crux of bullying. Of course, bullying is more than a bad mood, it’s an on-going, consistent state of social terrorism.
***
My daughter recently received an email written by four girls she believed were her friends. In cowardly fashion (and against school rules), they composed an email during school on a school computer using a school email address. After alienating her at lunch, they went to the computer lab and crafted their message, essentially telling her she “didn’t belong” in their group because she is “different.” They wrote it at 11:30am. She read it at 3:30pm while at home, alone in her room. We’ve all heard the stories of children who read emails or see posted photos or videos and then commit suicide. This form of bullying is insidious, silent and deadly. We must talk to our children (ALL of us!) and stand united in our absolute rejection of this type of behavior. My ten year old daughter cried for two days.  “Why? Why? Why?” echoed in her head. I allowed her to cry, but I made it clear that THEY were in the wrong, not her. I was surprised that she truly felt she had done something wrong. She told me she felt ashamed. I looked her straight in the eyes and said, “Listen, there is absolutely NO reason you should be ashamed. These four girls, THEY should be ashamed. You did nothing wrong.” She got some sleep and in the morning, she sent me this Internet picture: 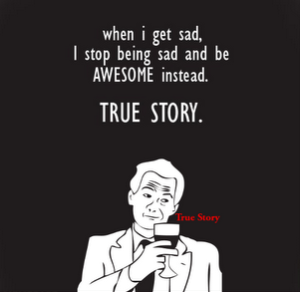 I was relieved, but wondered, “Is she really OK?” I had been asking her all week if there was something wrong, she hadn’t talked about her friends in a couple weeks. She said everything was fine.  This is not like her, to hide such things from me.  With the Internet, smart phones and tablets, it’s all too easy to carry on several conversations at once, even destructive ones. We must remain diligent in our efforts to fight bullying, but it has to start with the bullies. Parents need to be crystal clear in what is acceptable and what is not. One student has apologized, but her did not communicate anything to us or our daughter. She simply allowed her daughter to say, “I’m sorry.” As I told Ava, “Actions speak louder than words.” We shall see how things go.